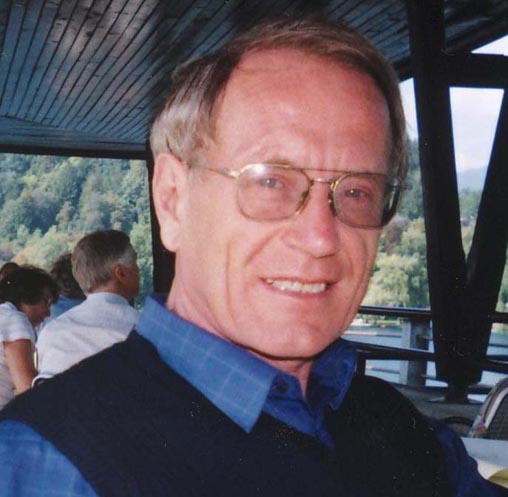 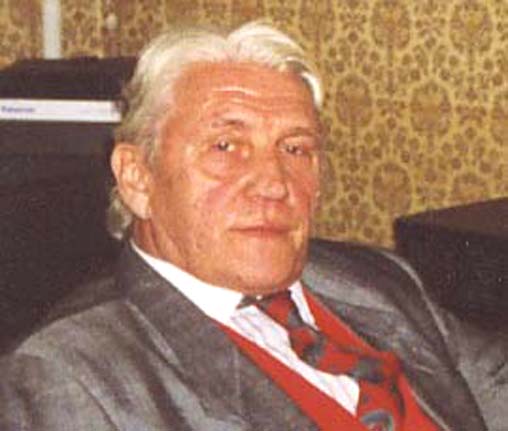 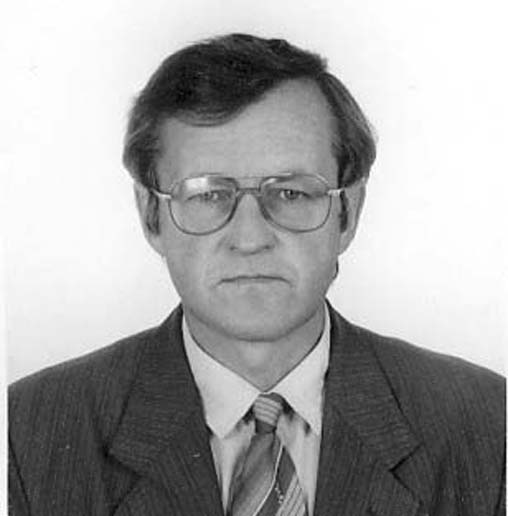 Epidermis is a system that lays the border between the body of the biological object and the environment. Traditionally it's considered as a structure devoid of any physical or physiological features, important for the life of an organism. The results of our numerous researches in this field let us think that epidermis plays an essential role in life sustaining for it provides energy and information exchange with the environment on the base of wave processes [1-4]. Thus, by using tortoise-shell scutes and then fish scales, we have designed the biosensors allowing remote registration of the pathology of different tissues, such as inflammation, scarring, traumas, ulceration and malignization [2]. Later on we have conducted a series of successful experiments with fish scales on indication of different environmental signals detections including earthquakes, geomagnetic storms and other external impacts [3]. By using capacitive sensors with fish scales as insulators, we have managed to selectively and remotely register the presence of the hydrocarbon compound - the black mineral oil [4].

This paper is the result of our researches of epidermis conducted during many years. By the example of fish we have formulated a conceptual model of the receptor system providing energy and information exchange between the body and the environment. Here are the materials on the structure and features of both single scales and the receptor system that joins all the scales into one system interacting with the environment. However, we do not refute the classical concepts of fish receptor system. The aim of our research is to improve this approach and show that the system of interactions between the organism and the environment is much more complex and diversified than it is seen in the traditional science.

Epidermis can be classified as a multilayer optical periodic milieu. Thus, Mikhailov I.N. has showed in his researches [5] the multiple layers of human epidermis; in our researches we have explored the multiple layers of fish scales, tortoise-shell scutes and bird feathers [6]. Picture 1 shows the fish scale transverse section. We can clearly see the multilayered structure and also note the optical density of different epidermis layers.

Pic.1 Cross section of fish scale On the scale surface we can distinctly see the system of lines and figures. Picture 2 shows the diagram of these figures that divide the scale surface into at least 4 parts: A, B, C, D. 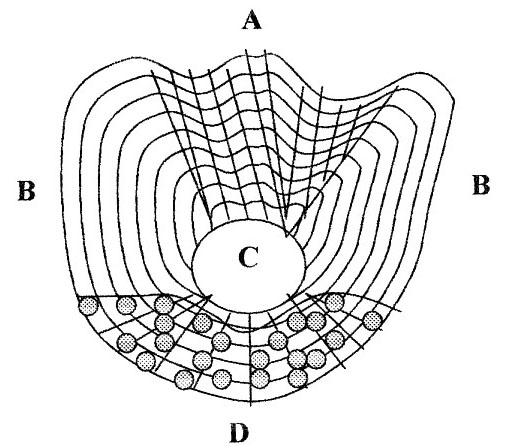 Pic.2 Layout view of scale surface
We can see these lines on the photographs of the surfaces of two real scales (Pic.3). 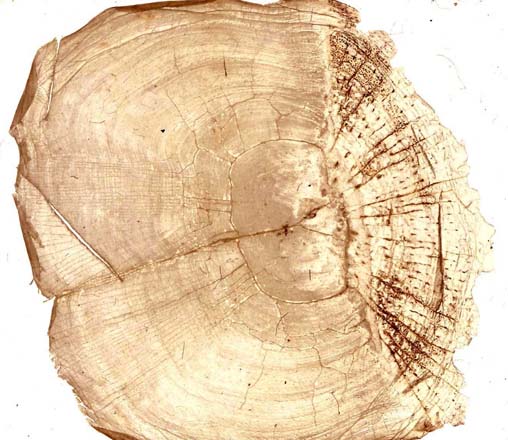 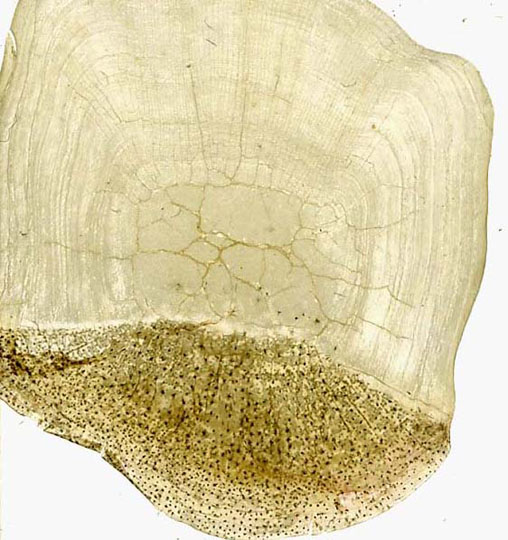 Through all these areas passes the system of looped concentric ellipse-like lines, enclosed into each other with a spacing approximately 20-40 mcm. There are more than a hundred of such ellipsoids. The enlarged segments of these ellipsoids are shown in the picture 4. 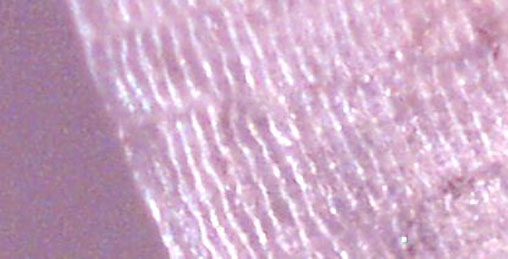 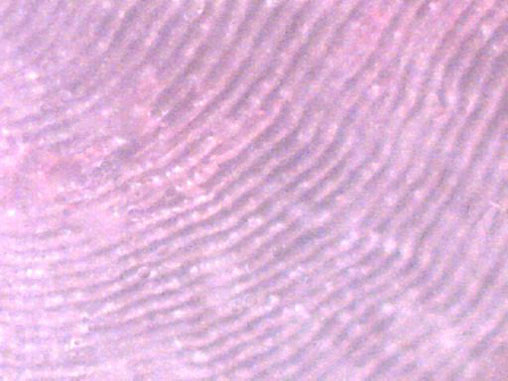 The "A" zone is formed by crossing of two groups of lines - the ones formed by ellipsoids and the vertical (radial) ones directed to the center of the scale surface. As the result they form a net (grid) observed from both sides of the scale. This grid spacing on the one hand is determined by the grid spacing of the ellipsoids (20-40mcm)and on the other hand by the distance between the radial lines (100-200mcm). Sometimes in this area we can see segments of the grid with large square cells with the spacing determined by the distance between radial lines: 150 ? 150mcm as it is shown in the picture 5. 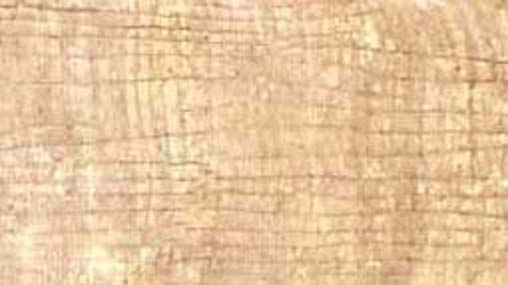 The "B" zone is formed by the set of lines in the ellipsoid system. The "C" zone is a matt ellipse in the center of the scale surface. The "D" zone attracts a particular interest. It is a gray area, a jelly-like membrane connected with the solid part of the scale. Picture 6 shows the 200 times enlarged structure of this area. 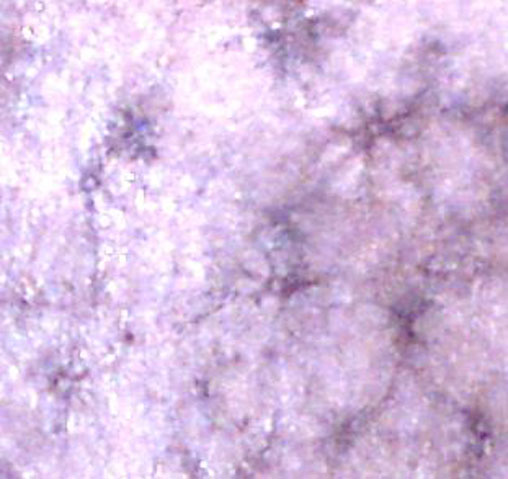 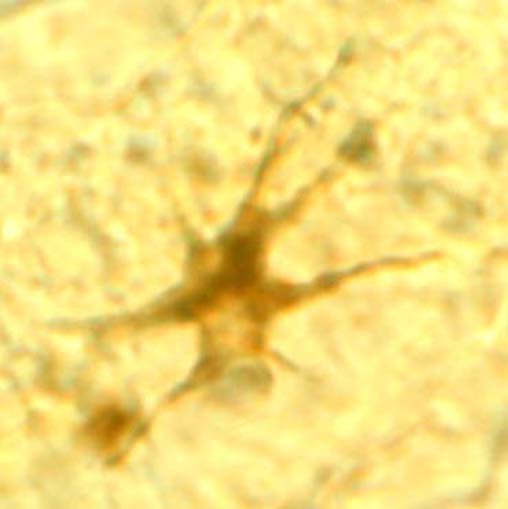 By painting the scale silver we have managed to discover at least two types of connections between these structures: unregulated connections that form areas tightly filled with these neuro-like formations and resembling gray matter, and a system of connections forming the net structure shown in the picture 8. 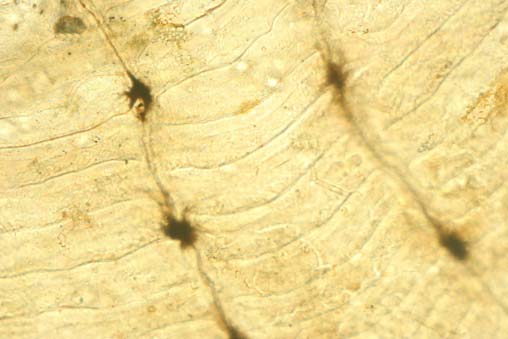 The spacing of this net is comparable with the grid spacing in the "A" zone. We need to mention here that the solid base of the gray zone "D" has the picture of the lines and figures very similar to the ones in the "A" zone (Pic.2-3). The gray membrane (the "D" zone) is morphologically and functionally connected through the skin with the body of the fish. Picture 9 presents the neurons in this zone close to its border with the skin. We see the neuron myelin sheath. This indicates on nervous connection between the gray membrane and the central nervous formations of the fish.

Picture 10 schematically displays the system of two interconnected scales in two dimensions - the section of the fish body. 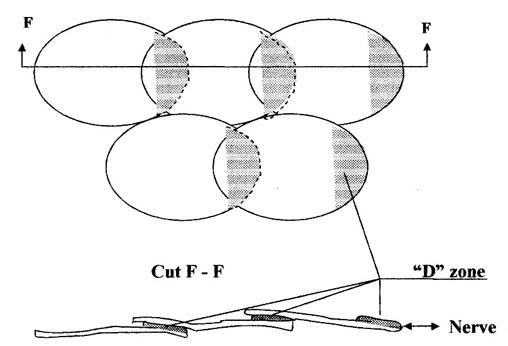 In this picture we see that one side of every scale (the "A" zone) covers the gray membrane of the neighbouring scale (the "D" zone). As the result, this area that includes the set of neuro-like formations connected in a certain way is located between two optical solid transparent structures with reticulated surface: the one from the neighbouring scale (the "A" zone) and the one from the scale it is connected to. One side of the gray membrane is joined to the skin. The connection with the electron-ion millieu and central nervous formations of the fish is likely to be accomplished through this joint. The middle matted part (the "Ѧquot; zone) resembles an optical formation that directly connects the environment and the body of the fish. So, the surface of the fish body can be presented as a mosaic epidermal structure where two types of the gray areas interleave - the gray ones that virtually are three-layered formations with the system of neuro-like elements in its middle and the light ones that are transparent single-layered areas with matted ellipse in its center (the "Ѧquot; zone).

Apparently, the functioning of receptor cell is provided by means of the solid electronic structure complex interaction, which composes the scale basis and the electron-ion component formed by gray membrane with multitude of neuro-like elements. As we have shown it in the series of experiments, the solid part may perform certain functions independently, isolated from fish body [2-3].

Hence, we believe that the detailed consideration of this structure functioning is utterly important. The data we have collected allows us to think that the solid part of epidermis is an insulator, an off-balance system or an active non-linear biological milieu [6]. Since the epidermis is multi-layered and recurrent in its structure, it allows us to put forward a hypothesis concerning its high functional importance in energy and information exchange between the body and the environment and between animal units. This exchange can be implemented not only in the range of visible light, but also in infra-red, acoustic and other ranges of waves. The spacing value of grid that is located on scale surface favors the suggestion about transformation, taking place in the IR-range, since the spacing is comparable to the wave-length in this range (30-150 mcm). A gray membrane forms an adequate milieu, providing the functioning of all the system of neuro-like formations (probably neurons). It has been shown that these formations may group together in a form of compact areas, resembling gray matter or constitute neuro-like net-structure. In this context we may venture a guess about possible information and analytic features this system has. In this regard the fact that there is a net outlined on the solid layer of the gray membrane, similar to the one in A-zone, which covers a gray area laterally from outside of adjacent scale, is drawing our attention. Moreover, radial lines remain even after the membrane is erased. It should also be stated that many of the neuro-like formations dispose alongside these lines. It is obvious that energy and information exchange with an environment is to be performed on condition of complex and coordinated inclusion of all receptor system elements. Here we may give a few hypotheses of this system functioning. Below you may see the two major of them.

Bilateral information exchange is carried out by means of subsystem shown on pic.11, namely by the gray membrane, located between two solid optical structures - exterior and interior. At this level a complex transformation of electromagnetic signal is implemented as possibly does a resonant interaction between net-structures in optical and neuronal areas, resulting from identical grid spacing, which stimulates neuro-like element system of gray membrane. Presumably it is the manner how the receptor cell works. Later on the electric signal is routed via nervous connection to central formations. 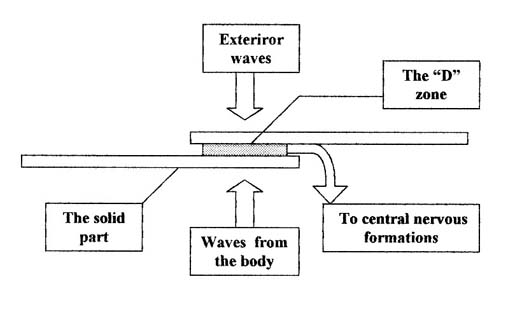 At this level a complex transformation of electromagnetic signal is implemented as possibly does a resonant interaction between net-structures in optical and neuronal areas, resulting from identical grid spacing, which stimulates neuro-like element system of gray membrane. Presumably it is the manner how the receptor cell works. Later on the electric signal is routed via nervous connection to central formations.

The principle of receptor sub-system functioning lies in building a hologram. Two currents of electromagnetic waves: pivotal, from the body (possibly in infra-red range) and exterior (signal or object), from the environment meet on a solid surface. Hologram recording takes place in the meeting joints of these two currents (pic.11).

Thus we have raised a question about crucial role of animal epidermis in realization of energy and information exchange with the environment. We have generalized the results of our experimental researches that had been held for many years. Below there are annotations for our main published works. At the basis of fish scales analysis we have put forward the hypotheses about the existence of radically new level of interaction between an animal and the environment.

At this rate, we have discovered a circumferential neuro-like system, spread over the surface of fish body in a form of gray spots mosaic in places where the scales laterally overlap each other. Each of these spots is a subsystem of many neuro-like elements, connected in a certain manner to each other and via neurons with central nervous formations. A solid part of a scale (the transparent one) is considered as a multifunctional element, divided into a few zones, each of which performs a different function in a whole system of energy and information exchange. We may speak of the two main functions here: the first is a selective perception of optic and acoustic waves of a certain range (infra-red for fish) and the second is a non-linear optical transformation of wave components in a multi-layered scale structure. We have been continually observing the latter function in our numerous experiments with groups of epidermal scutes of tortoise shell and fish scales. We have found out that epidermis can take a role of a transformer of photo energy into the short-waves. Transformers constructed of numerous scutes of fish and tortoise epidermis converted ultra-violet rays at the input of the system into X-radiation at the output. Also we have surveyed a possible mechanism of optic-neural transformation of a wave signal with the participation of neuro-like formations and solid part of receptor cell. Such complex optical organization of fish scale is quite similar in its structure to well-known systems of image recognition and position-control.